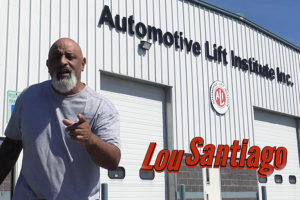 In the series, Santiago gives a behind-the-scenes tour of the new LiftLab facility at ALI’s headquarters in Cortland, New York. Along the way, he shares lift safety tips and highlights a couple of cool vehicles in the facility: a 1969 Plymouth Road Runner and a 1946 Brockway heavy-duty truck.

“Lou’s been wrenching on cars and trucks since he was a kid,” says R.W. “Bob” O’Gorman, ALI president. “He got his start through the New York State BOCES program for diesel mechanics, served his country as a Navy Seabee and has shown millions of people how to build and repair vehicles through his television shows. He’s a great guy to deliver the message that although everyone makes mistakes, it is important to focus on using and maintaining lifts properly to stay safe on the job.”

As Lou says in the video released today, “It’s no secret that most of us do not sit around the shop and talk about lift safety. (But) at some time in your life, you have to make a commitment to being safe. I’m being serious here. I’ve pulled out transmissions in the middle of the desert in a slot ditch. It’s not the way to do it, but when things get rough, you gotta do what you gotta do. Nowadays, when you’re in your shop, in the dealership, you don’t have to rush. I understand time is money. But you can’t get the money if you’re in a hole.” 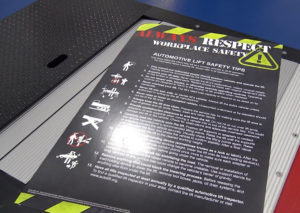 As part of the video series campaign, ALI is offering a free pair of shop safety glasses with every order of the new Safety Tips Poster that Lou highlights in the first episode. The 30-inch by 45-inch poster outlines 13 tips for safe lifting, including lift operation, maintenance and inspection. It is available in packs of two for $38 with free shipping in the U.S. The free safety glasses offer is good in the U.S. and Canada through August 21, 2018.

New episodes will be posted to the ALI YouTube Channel on July 31, August 7 and August 14.